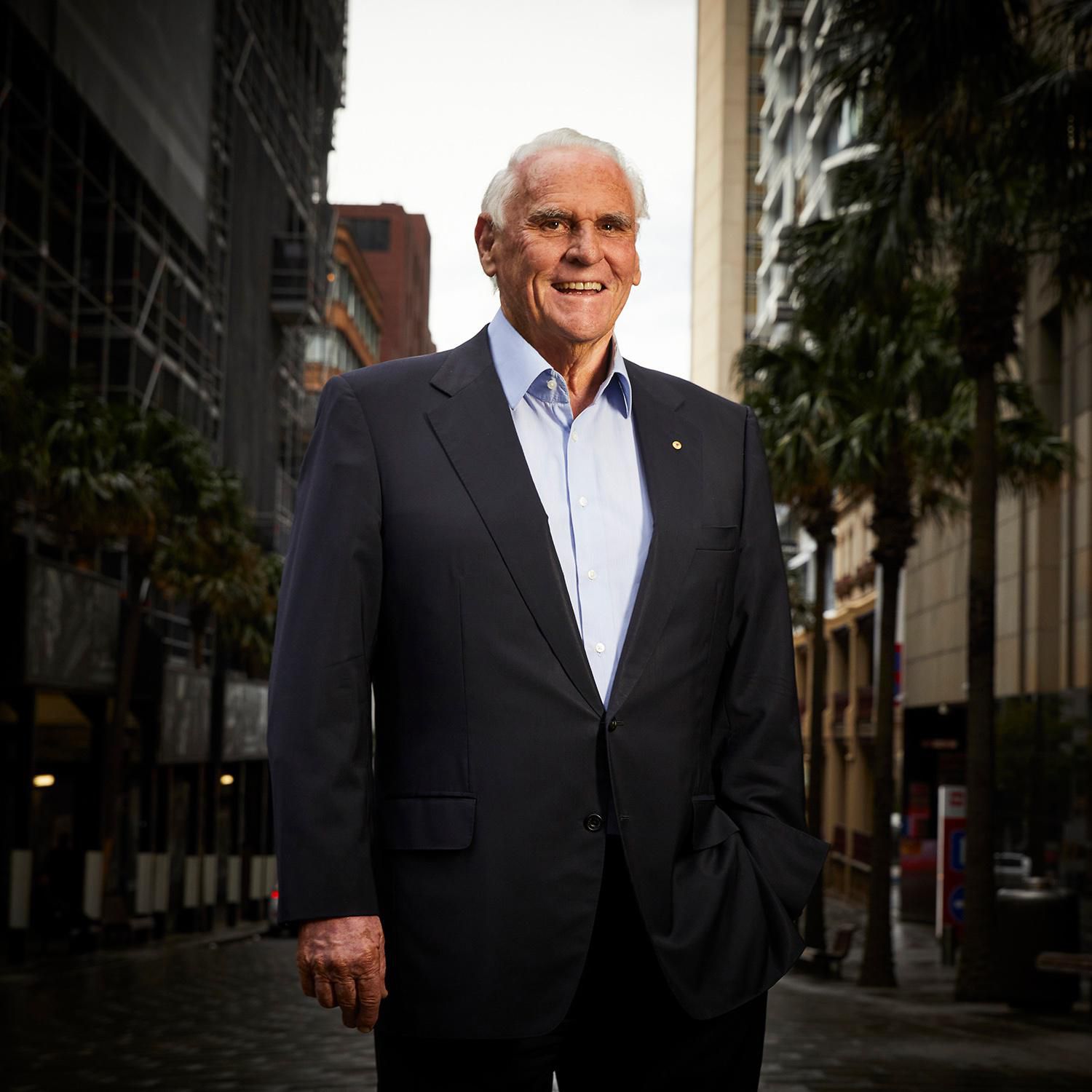 With the pandemic driving office vacancy rates in Australia to 12%, the highest in over two decades, one would expect the founder of the one of the country’s largest privately held property companies to be cautious. Instead, Lang Walker of Walker Corp. says: “I am unbelievably bullish about what we’re doing and where Australia’s going.”

What’s behind his optimism? Walker has shrewdly used the downturn to grow his Sydney-based Walker Corp.’s pipeline of planned projects by 36% in the past 12 months, some A$8 billion ($6.3 billion), to a total of A$30 billion. Among the advantages that’s helped Walker is that local authorities have been more willing than usual to cut red tape to issue approvals in order to support growth and create jobs. “It’s amazing the opportunities that present themselves when you’ve got a bit of vision and you’ve got a little bit of horsepower,” he says in an interview, conducted by video during a holiday in the Yarra Valley outside of Melbourne.

Currently, much of the A$4.85 billion in gross asset value listed on Walker Corp.’s 2020 balance sheet is in Australia. “We’re mainly in commercial and broadacre, master-planned communities in Australia [as] that’s where the market is best,” says Walker. He also has big plans for residential property. “We’re acquiring quite a lot of apartment sites in Australia, not to do now, but to start cranking that up in two to three years, when the market improves,” he says.

Walker’s skill in mastering Australia’s property market is shown in Walker Corp.’s results. In the past five years, Walker Corp.’s profits have jumped from A$105 million in 2015 to A$252 million last year—Goodman Group, Australia’s largest listed property company by market cap, grew its profits just 18% in the same period. Walker’s fortune has seen a similar trajectory, up from $1.18 billion in 2015 to a current Forbes estimate of $2.3 billion (and higher net worth figures can be found elsewhere).

Growing up an only child in Sydney, Walker, now 75, worked as a deckhand sailing yachts around Australia’s northeastern coast after high school. In the 1960s, Walker decided it was time to join his father Alec Walker’s earthmoving and civil engineering business, which evolved into a property developer in the ’70s. The business was renamed Walker Corp. in 1988. Though his father died in 2011, Walker’s three children are now active in the business.

Typical of the projects Walker is now developing is the A$3.2 billion Parramatta Square project in Sydney’s western suburbs, which broke ground in 2017. Expected to be fully completed next year, the project will feature Australia’s biggest office tower, with 120,000 square meters of total floor space, and cover 3 hectares. Tenants for Parramatta Square include the New South Wales state government and Westpac.

Walker Corp. owns additional properties in Sydney and other major Australian cities such as Adelaide, Brisbane, Canberra and Melbourne. During the pandemic, protracted lockdowns in several Australian cities prompted a shift to working from home. Yet Walker Corp. hasn’t experienced a “material reduction” in rental revenue or demand for office space, according to its 2020 financial report. Despite speculation about whether the trend of working from home would sound the death knell of downtown offices, most of the company’s tenants are staying put.

Walker says he has been fortunate in securing mostly large, stable corporate or government tenants. “All the tenants that we’ve targeted have been either government, semi-government, banks and other really high-end, big users,” he says. He says that they are reliable and low-risk clients: “Having banks and government as tenants, that’s been fantastic.”

Walker didn’t slow down during the pandemic, and kept his staff busy as well. “We haven’t stopped working,” he says. Whenever Covid-19 recedes in Australia, Walker believes staff will return to offices—with some caveats. “I think there’s going to be a hybrid model where companies will be a little bit more flexible about remote work, but a lot of the workforce actually want to be back in the office where they’re communicating and interacting with people,” he says. Walker realizes Walker Corp. may need to adapt to some changes in workplaces. “They’re going to have a lot more collaboration spaces, breakout spaces, you’re going to have winter gardens,” he says. “We’re already looking at ways to change our office designs for new buildings that we’re doing.”

However, it may still be a while before life is back to pre-Covid levels. “Tenant demand is expected to remain soft in 2021 given the potential downside risks,” writes Joyce Tiong, head of office occupier research Australia for CBRE, in a recent report. “Workplace occupancy will continue to be influenced by the containment of Covid-19 and the rollout of vaccination programs.”

In Walker’s view, no matter what changes Covid-19 brings in workplaces, there will always be demand for prime office space. One trend that he sees accelerating is that of companies looking beyond central business districts and establishing offices in cheaper locations, such as suburban or regional centers, allowing for easier commutes for staff. “There will be a greater focus on working close to where you live. And affordability is something people will be looking at,” he says. Parramatta, for instance, is 20km from Sydney’s CBD, but close to mostly residential suburbs. “The quality of our buildings in Parramatta is any bit as good as anything in the city, and we’re a third of the price,” Walker says.

Walker thinks more Australians will also want to seek a better lifestyle in the Sunshine Coast—already a trend before the pandemic. To that end, Walker Corp. is developing Maroochydore City Centre, 110km north of Brisbane. Covering 53 hectares, the project was launched last year as Australia’s largest greenfield CBD project, at a total projected cost of A$2.5 billion. “It’s not something we’re going to do overnight. We’re talking about rolling this thing out over 15 to 20 years,” Walker says. The project will include 160,000 square meters of commercial and retail space, with a convention center, and about 4,000 residential dwellings. It’s been dubbed the “CBD of the Sunshine Coast.”

A similar logic of looking for potentially affordable destinations with good lifestyles applies to his projects in Johor Bahru, Malaysia. He’s confident that Johor Bahru—located just across a narrow waterway from Singapore—will become an increasingly attractive alternative to pricey Singapore when the pandemic subsides. Walker Corp. started its Senibong Cove development in 2007, a project that now covers 306 acres, and includes a marina, retail, F&B and 8,000 residences in a master-planned community. Walker Corp. is also developing a second 376-acre development in Johor Bahru called Crest@Austin that will include a business park, residences and retail. “We can offer homes with designs and quality just as good as Singapore’s but at a third of the price,” says Walker. A home that might cost $750,000 in Singapore, Walker says, can be bought, of comparable quality and size, for just $225,000 in Senibong Cove.

Walker is betting that the Johor Bahru-Singapore rapid transit system (RTS), a rail link expected to be finished in 2026, should upgrade Johor Bahru’s attraction as an alternative to Singapore. The train system, which started construction in January, is being built to carry 10,000 passengers per hour each way between the two cities—replacing an antiquated train system that was there before. “When I first went to Johor about 15 years ago, I immediately saw the huge potential,” Walker says. “Singapore is one of the most expensive cities in the world. When the RTS opens up, Johor Bahru will be only 30 minutes away.”

One of Walker’s most spectacular projects is his Kokomo Private Island Fiji. The specialness of the place is shown in the name, Kokomo, which was the name of Walker’s childhood dinghy, and which he has also used to name an assortment of yachts he’s owned over the years. Opened in 2017, the resort has had to dramatically shift gears to adapt to the pandemic. After being closed for a year due to Covid-19, it reopened in April—but only to 12 guests or more from the U.S. willing to shell out at least $287,000 to buy out the 140-acre resort for a minimum seven-day visit. They will have the run of the place and their choice among the 12 villas and five residences at the resort. The package includes complimentary meals, drinks, massages and other perks, as well as “unlimited use of resort facilities.” However, guests will have to follow a strict protocol that includes providing a negative test result to be approved by authorities before departure, and a second test upon arrival.

Walker says he’s frustrated that Australia still hasn’t approved a long-discussed travel bubble with Fiji, despite the South Pacific country going a full year without a single Covid-19 case. “I’m a little disappointed the likes of Australia and New Zealand are not doing more to open it up,” he says. “We’re hoping that this bubble will be announced shortly.”

Kokomo had barely been opened long enough to recoup its investments when the pandemic halted operations. Walker takes the misfortune in his stride, joking that he considers the property his “not for profit.” When he first purchased the 57-hectare private island, it contained a half-finished resort abandoned by a previous developer. “It was a challenge. I thought, I can fix this in about 18 months, and it’ll take about $10 million,” he recalls. “After five years and more than $100 million spent, I thought, hmm, I don’t know whether this was a good idea.”

Though the investment may take longer than expected to pay off, Walker reckons it’s worth every penny. “Everyone has to have a passion,” he says. “I’ve got 10 grandkids, they all go there and it’s the glue that holds the family together. We go diving and sailing together. The family loves it. There are some things you do where it’s not about making money. But I’m now determined, having spent that sort of sum, to make it one of the best resorts in the world on all fronts.” As a longtime lover of the ocean, from his earlier days as a diver, Walker has said Fiji is “by far” his favorite island destination.

While the Covid-19 outbreak has been an unprecedented challenge in both personal and business terms, Walker is optimistic and eager to get back to something that looks like normal. “Of course, this pandemic has been terrible,” he says. “I dunno, I’m just a positive bugger who wants to get on with it.”

Once concentrated in Australia, Walker Corp.’s sprawling property empire also includes homes in Malaysia and a resort in Fiji.