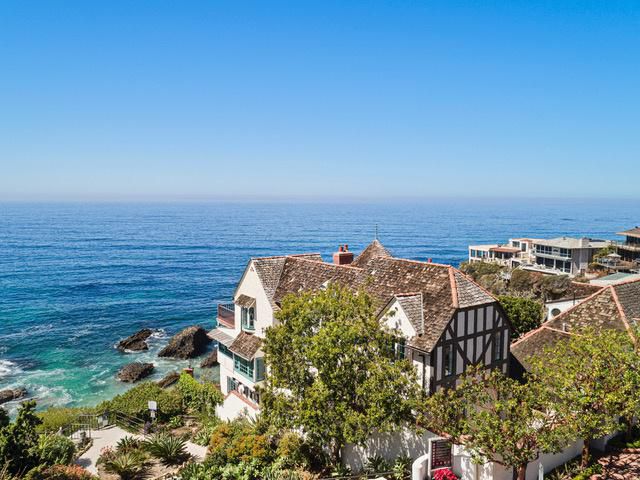 Few Hollywood stars achieved the stature of Bette Davis. With a career spanning more than 50 years and 100 acting credits, she was noted for playing unsympathetic characters and was famous for her performances in a range of films. A recipient of two Oscars, she was the first actor to be nominated ten times. Her career went through several periods of eclipse, but despite professional and health setbacks, she continued acting in film and on television until shortly before her death in 1989.

Now her Laguna Beach home is for sale for $19,995,000. While she has not lived in this oceanfront French Normandy estate since 1950, locals still refer to it as The Bette Davis House.

Local lore holds that the house was built in 1929 as a summer home for Charles H. Prisk, a wealthy newspaper publisher and owner of the influential Pasadena Star-News and Long Beach Press-Telegram. It was designed by Laguna Beach artist and architect Aubrey St. Clair, who was responsible for a number of grand waterfront homes designed for area A-listers. Past owners of the three-story, white stucco house have preserved many of the original features from when the actress lived here.

Located on a bluff overlooking rocky Woods Cove, a short distance from the shops, restaurants, and art galleries of Laguna Beach, the 5,400 square foot, six bedroom house perches high above the cove, with private-access steps leading to a sandy beach.

The main house, anchored by a baronial great room, leads guests to the Lookout Room and adjoining family room and dining room, all with stunning views of crashing waves and sea. With solid oak floors and updated styling throughout, the home encircles a central spiral staircase topped with a conical roof and spire.

A large, updated kitchen (one of two) has the appliances, space and finishes sought by passionate home chefs and caterers; the adjoining breakfast room’s vaulted ceiling hints at the house’s European style antecedents. Besides the four en-suite bedrooms in the main house, there is a two bedroom guest house with its own kitchen and a breezy, beach-house feel.

The vast main house butler’s pantry wears a charming, retro color scheme that is contemporary and sophisticated while evoking the 1940s, when Bette Davis’s career was at its peak.

The upper floor bar area has an ornate stained-glass ceiling. On this level there’s also a wine cellar and a fitness room. The estate boasts 5 full and 3 partial bathrooms.