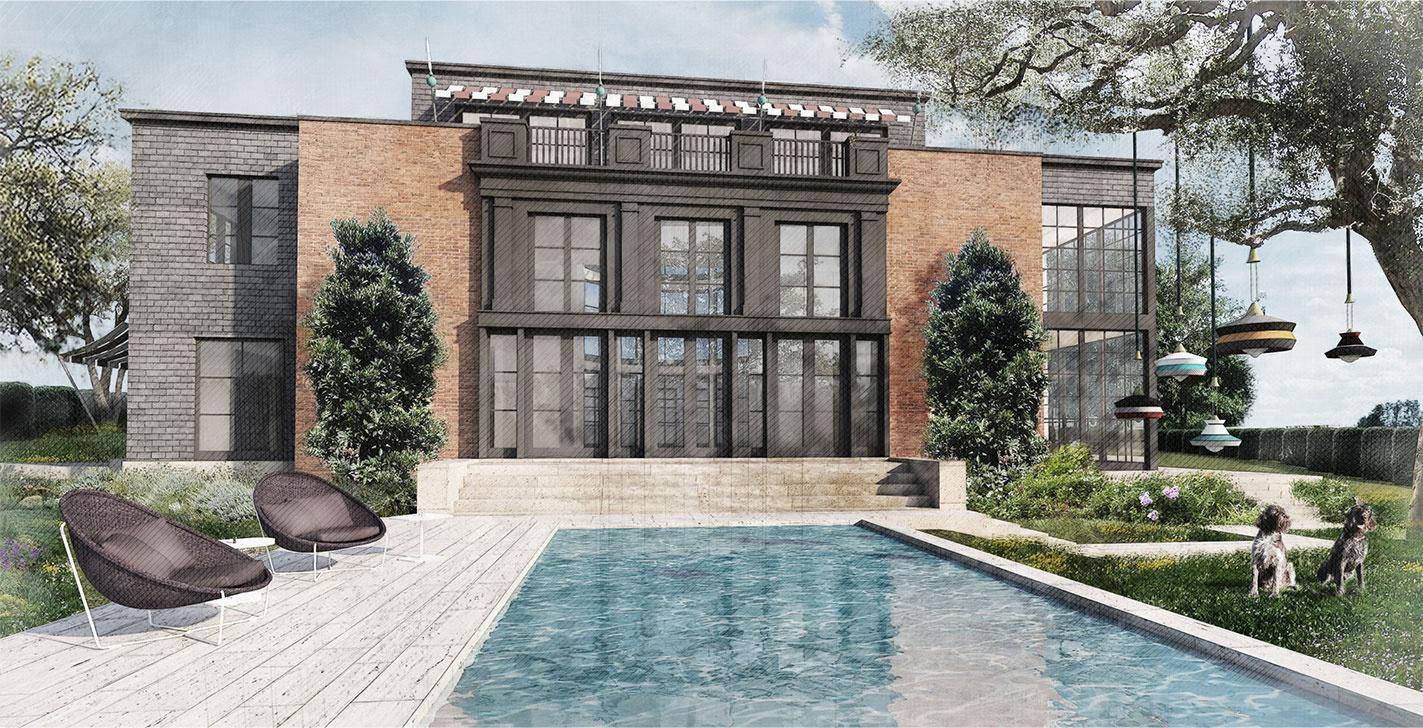 Hold on to your Stetsons because the real estate dirt is flying high in Texas, spurred this time, by a familiar real estate name from The Big Apple.

On April 27, The Eklund | Gomes Team at Douglas Elliman Texas Real Estate made their first sale in the Lone Star State, and boy, howdy, was it a big one, even for jaded tri-coastal industry professionals.

Newly constructed, beautifully designed, with dramatic interiors by Austin’s legendary Fern Santini Collaberative, 3705 Meadowbank Drive in Tarrytown forced a bidding war. The lucky buyer gets to move into one of the most exquisite new homes in Texas, completely turn-key with furnishings. How luxe? Let’s put it this way: the carpeting in the master closet is wall-to-wall fur. Proof of how the Texas market continues to scorch: the home sold over the asking price of $16.25 in 48 hours.

This magnificent property now reigns as the most expensive home ever sold in Austin’s tony 78703 zip code, Tarrytown, making Beverly Hills 90210 sales chicken scratch. As we all know, everything is bigger and better in Texas. Which is precisely why Douglas Elliman has come to town.

The Eklund | Gomes Team are basically the Marvel heroes of real estate: $2 Billion in real estate transactions in 2020. Sixteen years ago Swedish-born Frederik Eklund and John Gomes joined forces, later creating the Eklund | Gomes team at Douglas Elliman, Metropolitan New York’s largest brokerage. They are now the highest producing real estate team in the United States with 79 team members spread across four offices, from New York to Miami and Los Angeles. Their success was spurred by Eklund’s vivid TV persona throughout eight seasons of Bravo’s ‘Million Dollar Listing’. The two are great friends and team-mates. Eklund’s larger than life personality is grounded by Gomes’ meticulous attention to detail building behind the scenes. Both have now become tri-coastal as the firm expanded from NYC to Los Angeles, where Eklund now lives (so his twins can enjoy sun and water), and Miami — the “sixth borough”— creating what they have dubbed “the Golden Triangle”. All the real estate jet-setting energizes the team.

“I don’t feel like I moved there because we are all rotating. For me, what was really exhausting was sitting in the office, seeing the same markets and buildings and doing the same thing all the time in NY, but being in all of these markets is like a wet dream,” Eklund told Resident Magazine.

And now, Texas. Given our steroidal population growth, Eklund | Gomes could no longer ignore the Lone State State. The 2020 census nails the state’s population at 29,145,505 — up from 25.1 million in 2010 — gaining the most residents of any state in the last decade.  Douglas Elliman saw the wave coming: NYC, Austin, LA.

“From an outsider, Austin is the younger, cooler brother of Dallas. It’s the Portland, Oregon of the south,” says Alexander Ali, Founder & CEO of LA-based Society Group PR, EG’s public relations firm. “Elon Musk, Joe Rogan, and Chris Harrison, all these companies are offering incentives to relocate. Eklund started working on building a presence in Austin for over a year.”

That’s when the team conceived the “Golden Triangle”.

“We took out a map and drew lines to our hottest markets,” Eklund | Gomes co-founder John Gomes said. “It created what we call The Golden Triangle between New York, Miami, Austin, and Los Angeles. It’s the shape of the new real estate market.”

(Remind me to relay that is like the way the late Herb Kelleher conceived Southwest Airlines, drawing a triangle from Dallas to San Antonio to Houston on a cocktail napkin.)

He saw what many deep in the business already knew: New Yorkers, Los Angelenos wanted to add homes in Texas to their real estate portfolios.

“We immediately saw a huge amount of wealth being redistributed,” Eklund said. “Many people moved from California to Texas, records were being broken, and even those who did not entirely relocate wanted to add homes in Texas. We wanted to capture that growth, and new expansion was a necessity, and we knew we could scale up our model quickly.”

Julia Spillman, CEO of Eklund | Gomes’ Miami office, knows all about scaling quickly. She relocated for the EG “Miami Takeover” as Miami blew up: the team has more than $200 million in listings there, including several trophy apartments.

“It has to do with watching where the money is flowing,” she said. “We saw where developers and builders were looking, and the huge corporate relocations to Texas. Covid kick-started what was already brewing, and now Austin and Dallas are two of the hottest markets in the world.”

The Eklund | Gomes team is not your typical brokerage. Most brokerages are dependent on the local market period because for many years, deep dive local was powerful branding. For this team, it’s about portfolio diversification.

“We wanted to look at more of a financial advisor role,” says Spillman. “That way we can easily shift and pivot strategies. This change in our business model has been the right direction to go. We can serve our clients in The Golden Triangle, where they rotate and work.”

This is a team that makes things happen, creates strategic alliances, finds brilliant emerging talent, and when clients want something non-existent, they use those superpowers to develop it.

Eklund | Gomes is definitely shaking things up in Texas. Stay tuned for their next announcement about an upcoming Dallas project!

“As our first celebrity broker in Texas, Eklund | Gomes will bring a spotlight unlike any other brokerage to date in the Texas real estate market,” says Jacob Sudhoff, CEO of Douglas Elliman Texas. “We are thrilled to support the Eklund | Gomes team and their expansion throughout Texas, starting with the property at Meadowbank in Austin.”