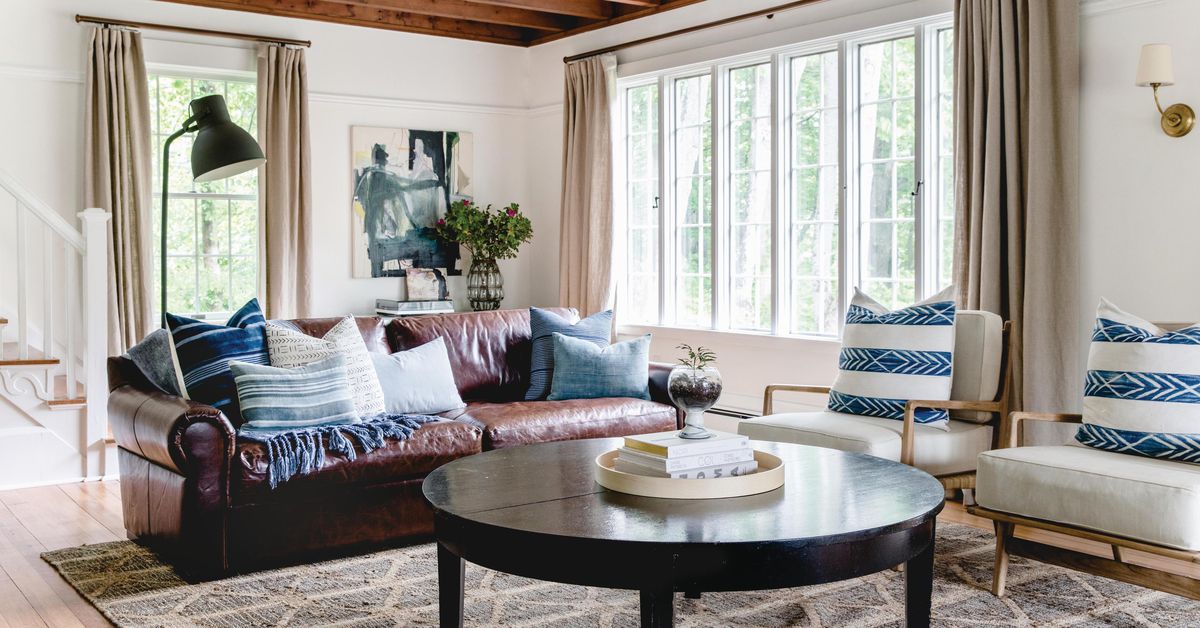 This article appeared in the Summer 2021 issue of This Old House Magazine. Click here to learn how to subscribe.

An old house is not frozen in time. And as the decades leave their marks, each owner leaves an imprint, too, based on what seems in the best interests of the house and its occupants. Compromises are involved. Tastes change.

Consider the story of this circa-1900 Dutch Colonial Revival and its current owners, Tyler and Katie Judkins. Located in Cumberland, Maine, just north of Portland, where the two both work, the house came with a kind of catalog of its home improvements: a photo album compiled by Carolyn Murray, whose family lived in the house for decades (she still lives nearby). The photos go back to a time when streetcars rumbled past it. There’s the house when it was still a summer place, then around 1960, when it was winterized. About that time it lost its wraparound front porch, while gaining an enclosed front entry. No one knows when the house acquired its first graceful arched opening, but one photo suggests 1969—four of them were there in the 1970s when Carolyn’s family moved in. They renovated too, of course, adding a fifth arch, using a plywood form found in the attic, while putting in a new kitchen, windows in the front, bay windows along one side and in back, and, in one ambitious push, a two-story rear addition with a main suite and an extra bedroom over a family room, mudroom, powder room, and a kitchen extension, plus a back porch.

When the next owner arrived, so did a garage with a breezeway connection to the back porch. The same homeowner spiffed up the kitchen, with perhaps more interest in resale than entertaining. No matter. Four years after buying it, he sold the house to Tyler and Katie, who took it in hand, bent on making it even better.

The two were already seasoned home improvers. Tyler learned carpentry skills from his dad, and he and Katie had renovated a house in Portland before deciding to tear it down and build from scratch. Katie had just gone into the interior design business with her close friend, Heidi Lachapelle—Tyler’s sister—who had mastered design while creating homey vignettes for the retail chain Anthropologie. She and her artist husband were renovating their own 19th-century fixer-upper. It was like having a design-minded family trust.

With a toddler underfoot and a baby en route, Tyler and Katie had been quietly itching for more space and period charm. “We weren’t really looking,” Katie says. “But then this house came on the market, it was in our budget—I loved the details, the working fireplaces with beautiful brickwork, the arched doorways, ample windows, and good light, which you don’t always find in old houses.”

Tyler, who describes himself as a 10th-generation Mainer and serves on the board of the Maine Historical Society, liked the fact that the place had a past. Town father Ephraim Sturdivant—famed for his many offspring and for importing the state’s first merino sheep—built the house next to theirs. “My understanding is his descendants built this house as a summer cottage for guests or ‘help,’ ” Tyler says. “It was half its current size and unfinished, with bare studs, until the 1950s.”

Equipped with five bedrooms and two and a half baths when he and Katie bought it, the house was ready for another growing family—with a few fixes. The ’70s-era powder room was dated, and the kitchen felt small for a serious cook like Katie. The mudroom/laundry was sprawling, and in an adjacent room a low-efficiency, high-decibel boiler/water heater “sounded like a jet engine every time you took a shower,” says Tyler. Some windows seemed too small, others needed replacing. The floors sagged; over the years the addition had begun to settle, uneasily.

Luckily, Katie’s mom lives down the road with a guest cottage where two serial renovators and a grandchild could hole up while work went on.

When they weren’t busy with their day jobs helping other homeowners, Katie and Heidi focused on the first floor, working with an accommodating general contractor, Michael Monsell, on structural repairs and a new layout. Tyler juggled his job as a financial advisor and a hankering to help. Functioning as a design-build team, with Monsell’s crew carrying most of the load, the foursome embarked on a six-month renovation.

Monsell says he likes the challenge of wrestling with old houses, the creative rejiggering to make the old and new pieces fit together, while facing down the ghosts of renovations past. Here, an exterior wall bowed, and “there were definitely floor issues,” he says, nodding to the way the addition was tied into the old part of the building.

“Older houses don’t always get the attention they need over the long term,” he notes. “A lot of times people get in there and want to do the kitchen but not address the underlying needs.”

Katie and Tyler wanted to do both. Katie, an inveterate space planner, sketched out a larger kitchen with a row of windows—in the very wall that bulged. Normally, Monsell would jack it up and slip in supports, but that would have risked cracking the tile in the main bath overhead. “Renovations are tricky like that,” he says.

With Monsell’s blessing, Tyler took down walls and did some of the reframing to grow the kitchen and shrink the mudroom, move the powder room, and relocate the washer and dryer to an upstairs hall, where he built a cabinet for them. The mechanicals room would get cut down to closet size, and hold a smaller, quieter, more efficient boiler/water heater, with room for dustpans and brooms.

Monsell rerouted pipes exposed by demolition and added a drain for the upstairs laundry. He used framing lumber to temporarily support the floor above, he adds, “while we pulled out structural members.” Walls were opened to add windows and insulation; Monsell says it was “a fair amount of work” to get walls square and cabinet-ready, not to mention leveling the floors.

The team, preferring porous walls over open plans, opted to keep the wall between the kitchen and dining room, and its arched opening, and to cut a conventional doorway between the new mudroom and kitchen. But as Monsell and his crew were about to mop up, someone had an idea. Why not make that doorway a sixth arch?

There are kits to make the job easier, but Monsell doesn’t love the MDF prefabs he sees around. So he copied the radius of an existing arch to make a form and used a jigsaw to replicate the trim. A still-awed Tyler quotes Monsell saying, “My dad and I will do the arch from scratch, for free.” Tyler adds, “It’s very labor-intensive to make a form, rip boards very thin, then steam them on the form, clamping and gluing, layer upon layer.”

Other fixes included alterations to the three fireplaces, laying new floor tile in the foyer, and later, installing pine flooring upstairs and replacing the roof. Work has never really stopped—this is an old house, after all.

With a bedroom for each child and plenty of room to run around, it’s a perfect home for a busy family. And it offers plenty to do, now that they’re raising vegetables—and chickens. When they’re indoors, “we mainly gather at the back of the house,” where the family room holds toys and a TV, Tyler says. He does love reading and napping in the library at the front of the house, although, he adds, “I don’t have much time to do those things these days”—their third child, a boy, arrived in March.

Katie still recalls first falling in love with the various details the house came with. “With those Dutch gambrels,” she says, “it was just charming.”

And now, in the wake of an especially thoughtful reno, a genuine keeper.

The homeowners: Tyler and Katie Judkins with daughter Isobel, 5, and son Larsen, 3.

The house: A 3,189-square-foot Dutch Colonial Revival in Cumberland, ME, built around 1900. Highlights included a handful of graceful arched openings on the first floor. Downsides included sagging floors and a bowed exterior wall. Also, the mudroom was a mess and the kitchen not set up for a serious cook.

Why they chose it: It would get them out of the city (Portland), into roomier quarters, and onto a two-acre lot with a sunny spot for a garden.

Their plan: Shore up a decades-old addition and iron out its first floor, kicking the laundry upstairs, enlarging the kitchen, and reworking the mudroom and powder room. Replace the roof, boiler, and some windows; and usher in polished decor and lots of white paint.

Their approach: Katie, the resident space planner, and husband Tyler worked with their contractor, Michael Monsell, and with Katie’s sister-in-law and interior-design business partner, Heidi Lachapelle, on traffic flow and finishes.

Lessons learned: Go with your gut and play some things by ear. Heidi points to a late-in-the-game decision to put an arched opening between the new kitchen and mudroom. “There’s only so much you can feel on paper,” she says. “It’s about intuition and recognizing you may not realize what’s needed till you are in the space—and being okay with that.”

The house came with five bedrooms, two and a half baths, and 3,189 square feet. The renovation kept the existing footprint while remedying the structural support, removing a bay window, and reworking the first floor in the existing rear addition: Walls came down to expand the kitchen, shrink a large mudroom/laundry area and a mechanicals closet, and shift the powder room into the former laundry area. The washer/dryer moved upstairs. The remodeled baths kept their footprints, as did a small bedroom turned nursery.