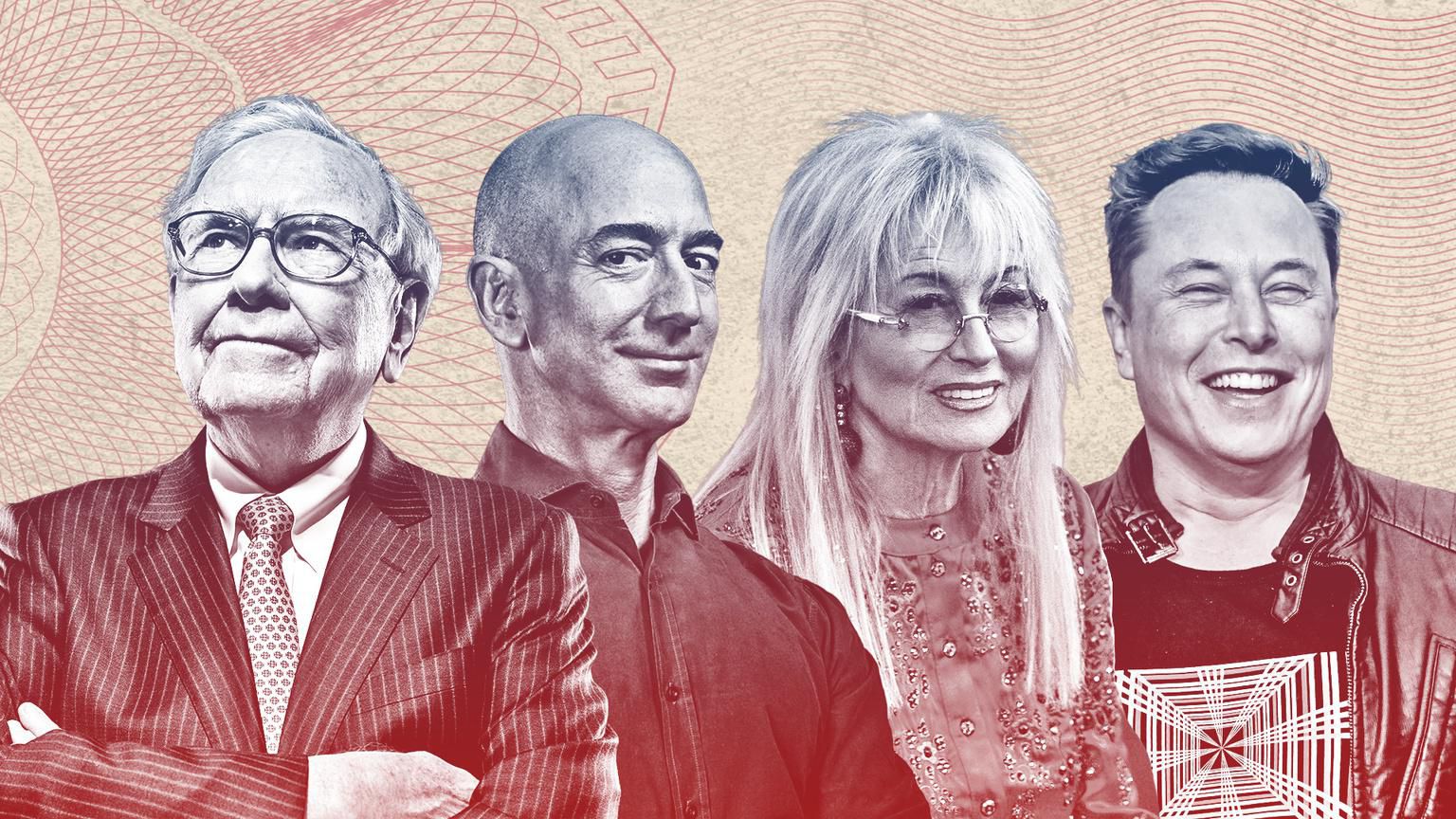 These 43 members of the three comma club represent over $1 trillion in collective wealth.

Although pandemic quarantines forced the vast majority of Americans to shelter in place for most of 2020, some billionaires moved to greener pastures. Or at least ones with lower taxes.

Take Elon Musk, for instance, who relocated in December 2020 to Austin, Texas—one of nine U.S. states that doesn’t collect income tax, igniting a firestorm over the fact that the three richest Americans now live in income tax-free states. (The other two, Jeff Bezos and Bill Gates, are residents of Washington state.)

That same month, software tycoon Larry Ellison took up residence in Hawaii, which is paradise by definition. But leave it to the Oracle billionaire to go a step further by moving to Lanai, the island he almost entirely owns after spending $300 million back in 2012.

The most high-profile move: Donald Trump, who went from being the richest D.C. resident (and its only billionaire) to one of more than five dozen billionaires in the Sunshine State—and far from the wealthiest there.

More than half of America’s 724 billionaires live in just four states: California (173 billionaire residents, including some non-U.S. citizens), New York (118), Florida (68) and Texas (64). But the ultra-wealthy are everywhere. Forbes found at least one billionaire in 43 states. Only seven states—Alabama, Alaska, Delaware, New Hampshire, North Dakota, Vermont and West Virginia—have no known billionaire residents. New Mexico picked up a billionaire for the first time  in  newcomer Ron Corio, a solar entrepreneur. West Virginia, meanwhile, lost its only billionaire, the state’s governor Jim Justice , after his net worth tumbled below $1 billion.

Here is the richest billionaire in every U.S. state; net worths are as of March 5, 2021.

Garcia is the largest shareholder in online used-car and auto loan platform Carvana. His son, Ernest Garcia III (also a billionaire), founded the company. The Garcias took it public in 2017.

The Walmart heir is the youngest son of company founder Sam Walton. He sat on the retail giant’s board for more than a decade before yielding his seat in 2016 to his son, Steuart.

Last year Larry Ellison, the founder of software firm Oracle, was California’s richest resident. Now Zuckerberg is wealthier than Ellison—and Ellison has moved to Hawaii.  Shares of Facebook soared 80% in the past year, pushing Zuckerberg’s fortune up by $42.3 billion in the past year.

Anschutz got his start in business selling Kool Aid at the age of six, but since branched out into oil, railroads, telecom, real estate and entertainment. He also owns the NHL’s Los Angeles Kings and holds major stakes in the NBA’s Los Angeles Lakers and their home court, the Staples Center.

Dalio’s Bridgewater Associates has long been known as the world’s largest hedge fund. 2020 was not the firm’s best year; it reportedly laid off dozens of employees in part due to investment losses.

The digital trading pioneer, a descendant of Hungarian aristocrats, first arrived in the U.S. as a penniless immigrant in 1965 at the age of 21. He founded Interactive Brokers in 1993 and served as CEO until 2019.

Kennedy chairs his family’s privately-held media and automotive firm Cox Enterprises and served as its CEO for a decade in the 1980s and 90s. Ownership of the company is split between him, his sister (also a billionaire) and his cousins (also billionaires).

The Oracle founder, chairman and chief technology officer spent nearly four decades as CEO before stepping back in 2014. These days he serves on the board of Tesla and lives on his Hawaiian island, which boasts a hydroponic farm and luxury spa.

The multi-level marketing magnate, who was born into a poor farming family, founded and runs Melaleuca, which makes and distributes over 400 products, ranging from health supplements to eco-friendly household cleaners. VanderSloot is a prolific Republican donor.

Despite shelling out $800 million in recent years for homes in London, New York and Palm Beach, Chicago continues to be Griffin’s home base. It’s there that he runs Citadel, a hedge fund he founded with about $34 billion in assets.

Cook runs the medical device company Cook Group, which was started by his parents from their Bloomington apartment in 1963. He took over as CEO when his father died in 2011.

The seed billionaire continues to reside in Iowa, where he grew up as the son of a farmer and began helping out with the family business at age five. He’s given to multiple institutions in his home state, including McPherson College, Drake University and Spurgeon Manor.

The native Kansan has a 42% stake in the $115 billion (sales) Koch Industries conglomerate that his father founded in 1940. Its businesses range from oil refining to Stainmaster carpet and Dixie cups.

SOURCE OF WEALTH: SELF STORAGE

The daughter of self-storage and horse racing magnate B. Wayne Hughes, Gustavson is Public Storage’s largest shareholder, with an 11% stake. She resides at her family’s Spendthrift Farm, home to stallion Cloud Computing, the 2017 Preakness champion.

Benson is the owner of the NFL’s New Orleans Saints and NBA’s New Orleans Pelicans. She inherited control after her husband Tom Benson’s death in 2018, despite legal challenges mounted by his daughter and grandchildren.

Alfond and her three siblings inherited a fortune built by their father, who sold Dexter Shoe Company to Warren Buffett in 1993 for $420 million worth of fast-growing Berkshire Hathaway stock.

Rales is chairman of industrial firm Danaher and sits on the board of Fortive Corp., a Danaher spinoff overseeing industrial technologies, measurement and petroleum. In 2020, Danaher acquired GE’s biopharma business for $21.4 billion in cash.

Johnson is CEO and chairman of mutual fund behemoth Fidelity Investments. The Boston-based company was founded by her grandfather in 1946; Johnson took over from her father in 2014.

The chairman of printing firm Taylor Corp. holds stakes in the NBA’s Timberwolves, the WNBA’s Lynx and the United FC soccer team. He also owns the Minneapolis Star Tribune newspaper and farmland in both Minnesota and Iowa.

The Duff brothers started Duff Capital Investments in 2007, a holding company with total revenue of more than $2.6 billion. Their father started Southern Tire Mart in 1973 and sold the tire dealer in 1998; the brothers bought it back in 2003.

MacMillan Keinath is believed to be the largest shareholder of Cargill, the world’s biggest food company, with an estimated 13% stake. Her great-grandfather started Cargill in 1865 with a single grain mill.

The copper, diamond and railroad tycoon holds his business interests under the Washington Companies umbrella. Washington and his wife, Phyllis, have given more than $840 million to their philanthropic foundation, which focuses on at-risk youth, along with other socially-disadvantaged people.

Miriam Adelson is the widow of casino magnate Sheldon Adelson. He died in January 2021 at age 87 and left her his controlling stakes in the Las Vegas Sands casino empire and the Las Vegas Review-Journal newspaper.

Commisso is the founder and CEO of cable company Mediacom. He immigrated to the U.S. from Italy in 1962, at age 12, and started his career as an accordion player, performing during movie theater intermissions.

Corio founded solar firm Array Technologies in 1989. The Albuquerque-based company specializes in manufacturing solar trackers, the mechanical arms that angle solar panels toward the sun. Array raised over $1 billion in its October 2020 IPO. He is New Mexico’s first billionaire.

The former New York City mayor spent more than $1 billion of his fortune on his failed 2020 presidential bid, then sunk hundreds of millions into defeating Donald Trump’s reelection.

Goodnight runs analytics software firm SAS, a role he’s held since the company’s 1976 founding. He started the company with John Sall after the two met at North Carolina State University. The two billionaires founded a private school and also co-own a country club and hotel.

Once called the “Merlin of the mall” for his success with Victoria’s Secret, The Limited and Bath & Body Works, Wexner came under scrutiny due to his ties to alleged sex trafficker Jeffrey Epstein. (Wexner said he had no knowledge of Epstein’s alleged crimes and also claimed the financier misappropriated millions of his fortune.) Wexner stepped down as CEO of parent company L Brands in 2020 and will not stand for re-election to the board in May 2021.

The couple owns convenience store chain Love’s Travel Stops and Country Stores. It grew from one gas station in Oklahoma to 490 locations in 41 states, with estimated annual revenues of $20.6 billion. Tom, Judy and three of their children all work at the company.

The Nike founder ran track at the University of Oregon before starting the athletic apparel colossus in 1964. Knight has since pledged over $500 million of his fortune to both his alma mater and Stanford University’s School of Business.

Yass grew up in Queens, New York, before attending SUNY Binghamton.  In 1987 he and a handful of partners cofounded Pennsylvania-based quantitative trading and market making firm Susquehanna International Group. He is new to the billionaires list this year.

Nelson is CEO of Providence Equity Partners, the private equity firm he founded in 1989. While in college Nelson deejayed a jazz radio show; these days he’s on the board of the Newport Festival Foundation, which puts on the area’s jazz and folk festivals.

Zucker is the CEO of InterTech, a private and family-owned chemicals manufacturer with $3 billion in estimated revenues. Her late husband Jerry Zucker founded the company in 1982.

Sanford owns First Premier Bank, which specializes in credit cards for high-risk borrowers. It’s based in Sioux Falls and has only 17 locations, but is one of the largest issuers of Mastercard.

Frist, a former Air Force surgeon, cofounded Hospital Corp. of America  with his father in 1968. Frist doesn’t hold a position within the company, but two of his sons have board seats.

The native South African relocated from California to Texas in December 2020.  Musk is reportedly trying to build a Texan town of his own called “Starbase” as part of his vision for space travel to Mars.

Prince hit billionaire status in May 2020, when stock in his infrastructure and security company Cloudflare reached record highs. The company came under fire before its 2019 IPO for providing services to notorious online forum 8chan, but Cloudfare cut the forum off after the August 2019 El Paso, Texas mass shooting.

The Virginian owns an estimated one-third of Mars  candy and pet food company, which was founded by her grandfather in 1911. The confections purveyor remains in family hands; her brothers John is also a billionaire, as are the four daughters of their late brothers Forrest Jr. (d. 2016).

The world’s wealthiest person still resides in the birthplace of e-commerce titan Amazon, which he founded in a garage in 1994. He also owns The Washington Post and space exploration company Blue Origin.

John Mars is an heir to Mars candy and pet food fortune. His sister, Jacqueline, is the richest person in Virginia.