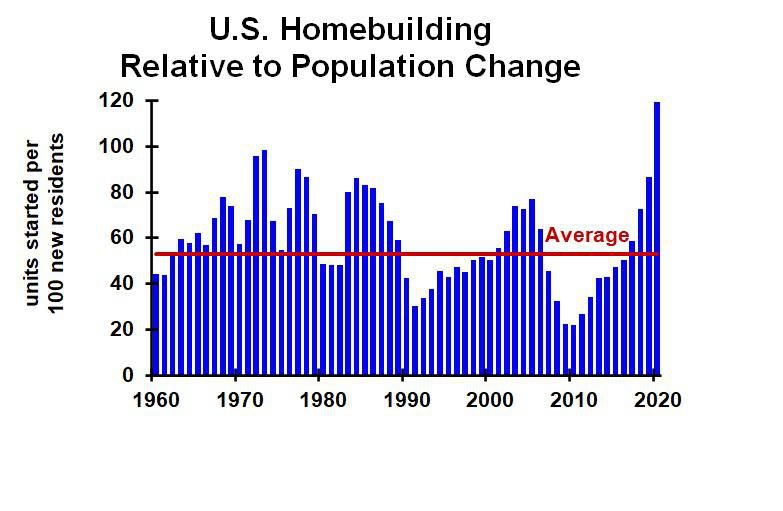 Housing starts in the United States last year exceeded population growth. Even if every new resident lived alone, we increased supply more than fundamental demand. And if a few people are shacking up together, then the excess supply is even worse.

This imbalance will ease, though, as multi-family construction will drop over the course of the year. The single family sector will see demand continue to grow as people move out of apartments, continuing to push up demand for standalone housing. If immigration returns, we’ll be glad we add the supply that we did in 2020—but that’s a big if.

Comparing total housing units built, both apartments and single family homes, with population growth helps to see gross imbalances. (Chart above.) For example, we clearly overbuilt from 2002 through 2006. Then we underbuilt relative to new demand because we had an excess supply left over from the boom years. Builders have been overbuilding from 2018 through 2020. This comparison is rough, though. Population change is measured from July 1 through the next July 1, but the building data are for calendar years. Demolitions and mobile homes are not counted in this simple comparison. But for big imbalances, the measure provides valuable information.

The 2020 pandemic led many people to try to move from apartments to single family houses, and that’s the greatest part of the story. Some people had been planning on buying a home in a few years, and cheap mortgage interest rates enabled them to move ahead of schedule. Others wanted more room for working remotely. And for others, the fun of urban living dimmed during lockdowns. We economists focus on changes “at the margin.” We recognize that most people will remain in their current housing types—renters keep renting, owners keep owning. But a change by a small number of people from one type to another can have a pronounced impact on prices. So demand for single family houses jumped, prices rose and builders stepped in to meet demand.

Multifamily construction slowed only a little in 2020, which may seem odd. But apartment projects have larger lead times, and the larger the project, the longer the time from inception to completion. The land acquisition, financing and permitting is usually more complex and takes longer for apartments than single family homes. If the official statistics show construction starting in August, entire project had been conceived long before. The developers decided to keep rolling because they had so much invested in the preparation.

Now landlords are offering new tenants concessions to get them to move into apartments, and vacancy rates have edged up (though the data are less reliable than usual due to the pandemic).

Low population growth, however, poses a challenge to the housing market. Last year’s population growth was the lowest in over 100 years. The number of new residents per year was three times higher in the 1990s than it was in 2020. The low growth was due mostly to very weak foreign immigration. Although most immigrants are not home buyers right away, their need for housing units of some type props up total demand. Without them filling rental housing, the economics of buying versus renting wouldn’t lead so many people into owning homes.

The outlook for immigration during the Biden administration is a little better than during the Trump years, but remember that Democrats historically have been suspicious of foreigners bidding down American wage rates. However, the Biden administration will probably deport fewer immigrants than Trump did or wanted to, and fewer than in the early years of Obama’s presidency. That doesn’t increase housing demand, but lessens the erosion of demand. Labor unions will pressure the president to hold the line on foreign labor competition. Businesses typically want more foreign workers available, but they hold less sway in the new administration.

If population growth in future years remains as low as it was in the 12 months through July 1, 2020, then zeroing out all multifamily construction would still leave us overbuilding. The pandemic will eventually be over, which will probably boost immigration. But without significant population gains, the United States will have an overabundance of housing.

The brunt of the oversupply will be felt in multifamily, because the total overbuilding coincides with the shift from apartments to single family homes. While mortgage rates stay low—probably most of 2021—the single family home market will remain strong. But rising interest rates in 2022 or later will coincide with much cheaper apartment rentals, hurting single family home demand. Prices may not fall, but heady appreciation will be over.

This picture represents the national average in the United States. Local areas will vary around the average based on migration into and out of various cities, as well as local zoning changes and overall economic growth. But the highflying home price gains of 2020 won’t last forever.