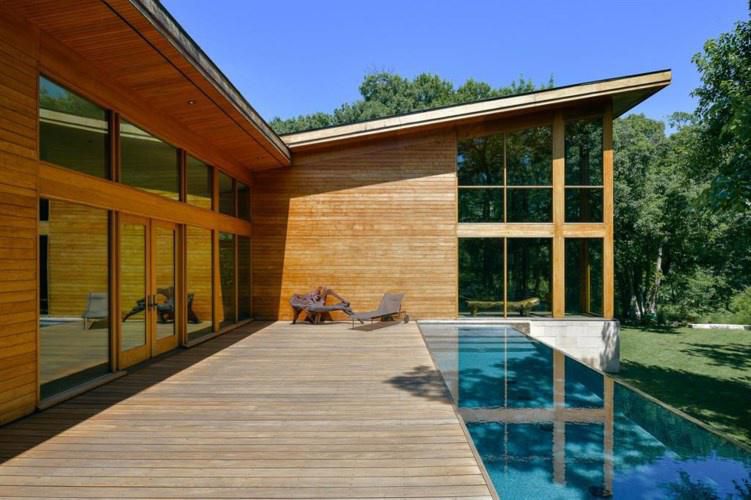 This story is SO Dallas. And this home is so valuable now given the high cost of lumber. Most people design a home, specify materials, then purchase them. This may well be one of the only homes in town where the materials directed the design and the entire house.

In 2006 Don Daeske, a Dallas-based trucking magnate referred to as the Accidental Trucker, bought a teak company: East Teak Fine Hardwoods, Inc. This was before he purchased Smokey Point Distributing, an acquisition which would show a revenue of $205 million by 2013. In January 2014 the company merged six trucking company subsidiaries earning Daeske the Entrepreneur of the Year title for the Southwestern Region by Ernst & Young. His transportation acquisitions did not cease. Daseke, Inc. is now the largest flatbed and specialized transportation and logistics company in North America with 6,000 tractors and 13,000 flatbed and specialized trailers, plus a million-plus square feet of industrial warehousing space.

But what about the teak company?

After he bought the teak company, the trucking entrepreneur turned to his wife Barbara, a prolific local interior designer and asked, “What do you think about building a house made of teak?”

Teak is the most durable and weather resistant wood you can ask for. It’s insect resistant, a huge plus in Texas, and almost impossible to burn. The wood is also gorgeous to look at.

The Daeskes had been living on a two-acre idyllic woodland in Addison for 15 years, but that teak company made them stir crazy with their existing home. So when Don popped the teak question, Barbara was instantly on board and had the perfect architect in mind: David Droese of Droese Raney, whose local work includes popular high end Dallas stores like Forty-Five-Ten, Billy Reid, the gastric pub Harlowe MXM and other local eateries, as well as award-winning residential projects. The plan was to replace their existing home on the idyllic property with the Teak House.

Droese was certainly a big architectural name in town, but he was also well-schooled in commercial construction. His training gave him insight into unconventional methods to give life to Barbara’s plan and fully utilize the teak wood on more than just exterior surfaces.

Of course she would design her own home. Barbara is the owner of Barbara Elliot Interiors and has worked on high-rise hotels and offices to luxury residences in the United States, Europe, Asia and Indonesia. “Residential, commercial and hotels of all kinds. I even did an apartment in Paris,” says the designer. “I’ve done it all.”

It was her design flair plus love for natural environments and cultural variety that inspired the couple to build The Teak House. Completed in 2010, the residence is not their first on the forested lot. knew how she wanted the home laid out with a private façade and the back completely open to those gorgeous woodland views.

“The site is so extraordinary,” Barbara said. “It’s like living in a treehouse.

Their old home was torn down to create space for the new, constructed in 2010. The Teak exterior construction is complemented by many custom details inside and outside the home. The front door consists of teak-wrapped handmade glass, created by Jim and Mary Ann Bowman, famous local glass blowers. Loaded with finishes from around the world, the interiors also utilized teak wood with Myanmar, recycled hardwoods, Indian and Brazilian limestone, Quartz stone and custom lighting.

The entire structure is clean-lined with borrowed mid-century modern themes. The home carefully designed to blend with the environment and capture views of the forest.

“The architect and I worked so hard to interpret that,” says Daeske. “I don’t think we dwelled on style. One item I was certain of was that I wanted the house to have a lot of glass.”

“You feel just like you’re outside,” says the interior designer. “That’s all about those windows.”

Talk teak: the exterior siding is of teak, from Southeast Asia. It wraps the house, blurring the line between residence and landscape.

All interior walls, door frames and window mullions are also teak. Nearly every inch of the home is teak: ceiling, walls and cabinets,” says Daseke, from the ceilings to the floors.

And flooring is repurposed teak imported from India, recycled from century-old buildings torn down to make way for new construction. (Sound familiar?)

The teak serves as a backdrop for the home, outlining the interior with natural hues and providing a canvas for Daseke’s organic design elements. The owners’ deep appreciation for nature is reflected in the myriad varieties of natural materials.The home is also energy efficient with a geothermal system for heating and cooling.

“I tried to keep the colors of the furniture and anything that was painted, complimentary to the teak,” says Barbara. “The kitchen has a giant island made of of the most beautiful Brazilian quartzite. It’s so beautiful and unusual, when I found it I almost had to lie down on the slab and declare, it’s mine!”

The Teak House is 7,196 square feet, considered an average for large luxury Dallas area homes. Yet there are only three bedrooms and four bathrooms.

“The house feels more enormous than it actually is, “ says Daeske, which makes it a great house for entertaining.

“There is nothing you’ve seen with this kind of flow,” she insists. And she has seen a LOT.

As for that exterior, the Daeskes say it’s relatively maintenance free with one exception, and they have a solution.

“If you don’t oil teak, it turns gray so we have a painter roll on oil to keep that beautiful color.”

Just like conditioning a salad bowl. The Dallas Teak House at 656 Celestial Road is technically in Addison, but is listed for $4.25 million with Allie Beth Allman’s Elizabeth Wisdom.