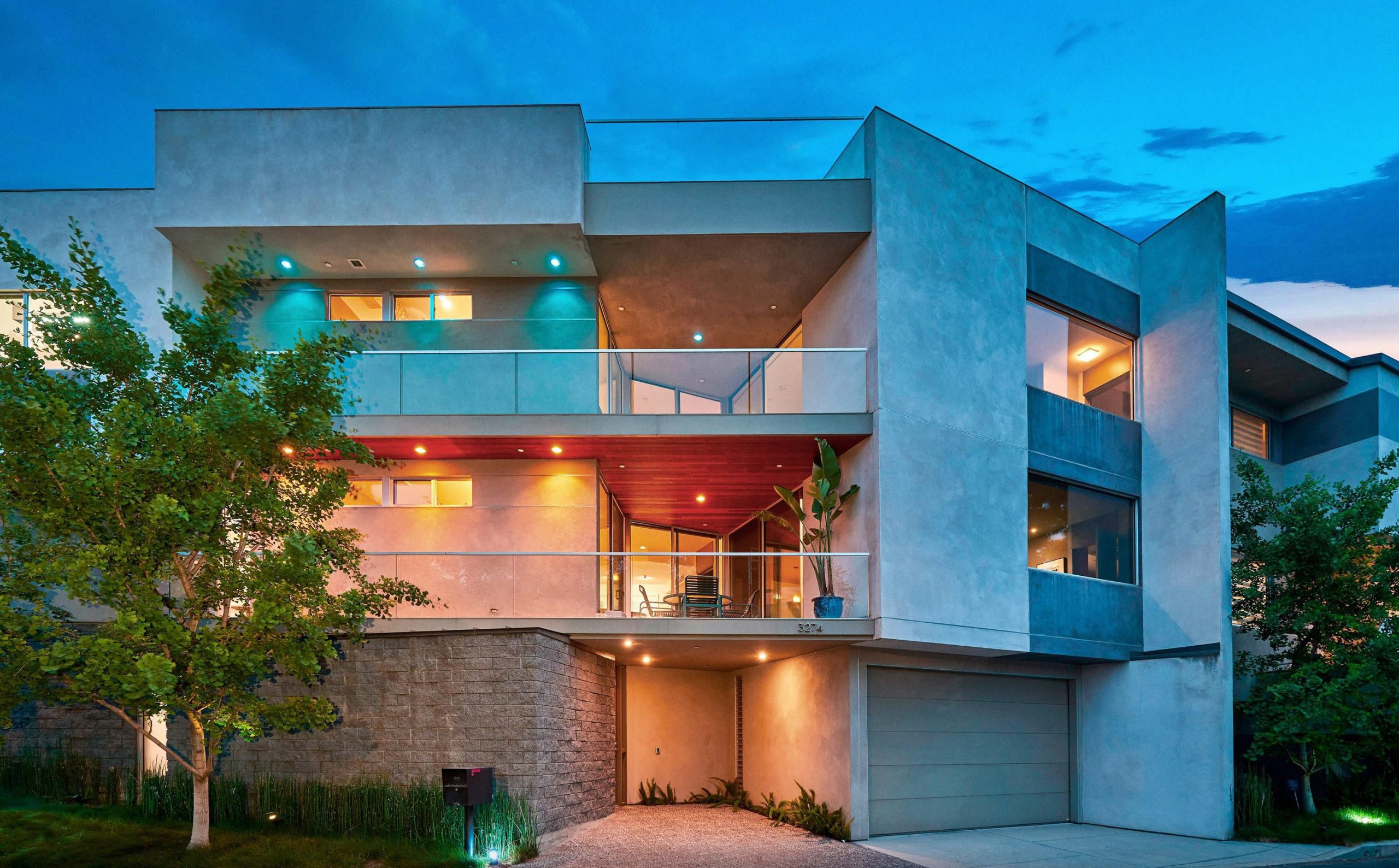 In 2007, Donald Wexler, the late Mid-Century architect (a protegee of Richard Neutra and William Cody) who helped shape Palm Springs’ Modernism movement, designed a Hollywood Hills compound for his son, international photographer and director Glen Wexler. “Donald Wexler worked together with Glen, who wanted a very specific live-work space. That is what the design is focused on,” explains David Kramer, a top-producing agent with Hilton & Hyland in Beverly Hills who recently sold the home for Glen Wexler.

(Disclosure here: I interviewed and profiled Donald Wexler for Palm Springs Life years ago. The afternoon I spent touring Mr. Wexler’s designs with him remains a career highlight.)

Dramatically different describes the home. Lofty ceilings frame the oversized sized living room where you first glimpse the home’s focal point –additional creative areas flow from the two-story gallery space. Natural light through clerestory windows and walls of glass can be found throughout.

A gourmet chef’s kitchen, dining room, and media room all open to exterior patios. The design captures the indoor-outdoor lifestyle the architect was noted for. The oversized master suite leads to an infinity-edge spa and waterfall. Far-reaching city and hillside views compliment the property from its prime Hollywood Hills location.

The five-bedroom, six-bathroom concrete compound recently sold for $3,461,050. “We knew the buyer for the home was very specific. We used the floor plan, which included two kitchens, a two-story gallery, artist studio and media room, to market and attract a targeted buyer,” Kramer says. The buyer, an international artist, made an offer immediately upon seeing the residence.

Donald Wexler’s use of prefabricated steel in residential design in Palm Springs gained international exposure in the architectural community. According to the Palm Springs Modern Committee, “the Alexander Construction Company contracted Wexler and Harrison to design an innovative neighborhood of all-steel homes at the then northern edge of Palm Springs. Due to the rising costs of steel, the project was halted after just seven homes were built. These innovative factory-fabricated, site-assembled steel houses combined prefabricated components with standard construction methodology and are now internationally acclaimed.” These seven homes Wexler and Harris designed are much sought after by Mid-Century enthusiasts.

The timeless and award-winning Palm Springs International Airport (often grabbing the top spots in the best airport in the United States rankings) was designed by Wexler. A perfect example of Mid-Century simplicity and elegance is the 1964 Wexler-designed Dinah Shore home on Hermosa in the Las Palmas estate area of Palm Springs. Actor Leonardo Di Caprio reportedly purchased the property several years ago.

An award-winning photographer and director, Glen Wexler is known internationally for the hundreds of record album covers he created and executed elaborately staged digital photo compositions of improbable situations for Van Halen, Michael Jackson, Black Sabbath, ZZ Top, and Rush. Wexler displayed these in his home’s gallery showroom, where they were seen by celebrities, artists and musicians who were frequent guests of the architect. He has also worked on top advertising campaigns for Acura, Sony and Microsoft, to name just a few clients. His photography also appeared on the cover of TIME.

The Wexler compound illustrates how timeless creative design by an iconic architect is always in demand.