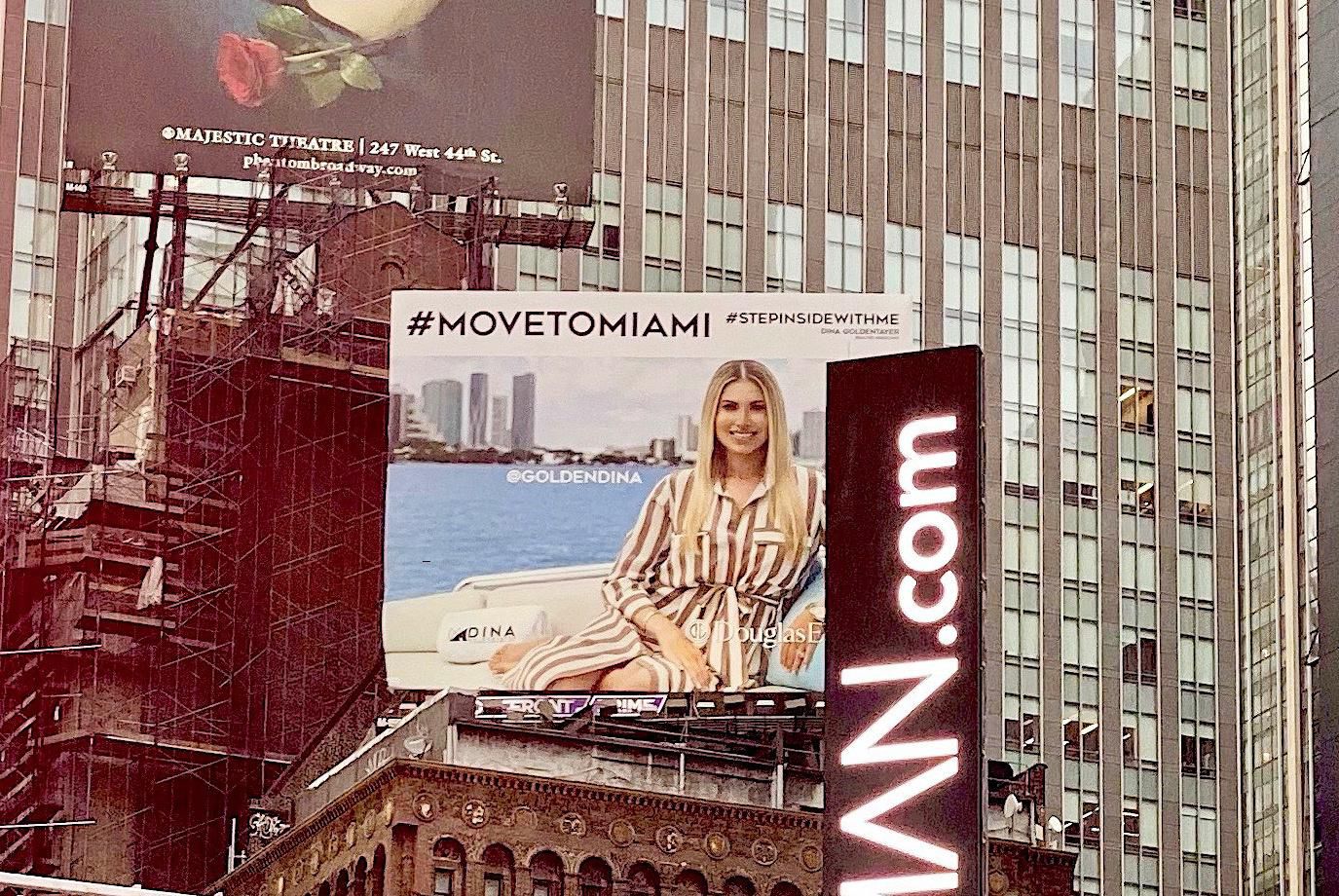 A few days ago on May 3rd workers on 7th Ave and 48th St in Manhattan unveiled Times Square’s newest billboard flanked by bright red LED Coca-Cola banners and advertisements for The Phantom Of The Opera, even though the Big Apple’s Broadway theaters have been closed for more than a year.

The 10’ x 60’ hashtag on the billboard framed above a panoramic photograph of Miami’s downtown skyline featuring Douglas Elliman’s top producing Miami real estate agent Dina Goldentayer on the bow of a yacht in Biscayne Bay pretty sums up South Florida’s current real estate market and start-up environment right now on the backside of the pandemic and sends a singular message to the rest of America—#MoveToMiami now. And get in while it’s hot.

It also says a lot about how America’s 40th largest city intends to become the next innovation capital of the world and the most attractive city in the U.S. for start-ups, Millennials, millionaires, downsizers, Babyboomers, and the new remote workforce by brute force of promotion.

Miami’s old school, guerilla-style charm offensive actually isn’t anything new these days—though with the addition of Goldentayer’s primetime Manhattan billboard, it’s clearly getting cheekier, cleverer, and bolder every day as Miami’s 2.0 momentum builds and South Florida’s in-migration from high-tax, cold-weather northeastern and midwestern states shows no sign of slowing down despite reports that Manhattan is eventually opening back up in June.

“I wanted to do something that would turn heads and stand out,” says Goldentayer of the genesis of her billboard. “Right now there’s a huge focus on digital marketing. But nothing is as eye catching as a billboard, especially one with the water and skyline of Miami. So I decided to go old school. But with a modern twist using the hashtags #MOVETOMIAMI and my trademark #STEPINSIDEWITHME so this could live on digitally as long as possible as well.”

By most accounts, “Miami Viral”, as some people are now calling it, all officially started back on December 4th, 2020 when the city’s Mayor Francis Suarez famously responded to a tweet by Silicon Valley venture capitalist and Founders Fund Principal Delian Asparouhov who flippantly asked one night, “ok guys here me out, what if we move silicon valley to miami”?

Mayor Suarez’s response two minutes later—“How can I help?”—was quickly dubbed the “tweet heard around the tech world”, initiating a flurry of new interest from start-ups, venture capitalists, and finance firms interested in moving to the largely tax-free, economically wide-open Sunshine State. In the aftermath, Mayor Suarez also appointed his first Venture Capitalist In Residence, Melissa Krinzman, to make Miami “the most tech and innovation friendly city in the world”.

Of her own recent piling in, Goldentayer knew that this was the time to reinforce Miami’s 2.0 moment.

“Miami is in the spotlight right now, which is long overdue. Mayor Suarez has done an incredible job to catapult attention and attract business to the area, solidifying our city as a world-class place to live and work and not just as a destination. I had been considering a billboard for some time, and when I saw the viral reaction to Mayor Suarez’s initial tweet and then his San Francisco billboard, I knew now was the right moment to become part of that movement.”

South Florida’s real estate prices remain on fire. Every week there’s a new announcement about another private equity or technology firm opening a new outpost in Miami or Fort Lauderdale, or up and moving altogether. And office occupancy rates in Miami’s business epicenters like Brickell, unlike Manhattan, are at near all-time highs despite the pandemic and the current new remote work normal.

On the tech side of things, Miami Viral is getting even more overheated—again thanks to the kind of roadside, guerilla, spontaneous marketing and PR championed by Mayor Suarez and others.

Two weeks ago, Founder’s Fund Delian tossed out another tweet about a private accelerator event called On Deck that was taking place in Miami which would bring together founders and investors to explore new ideas and create new entrepreneurship networks.

Mayor Suarez as usual seized on the moment and with Krinzman’s assistance turned the event through social media into Miami’s first impromptu “Tech Week”, making him and his Venture Miami team available to any start-up or investor interested in relocating to the city and ultimately helping to bring together more than 200 founders, VCs, investors, and related organizations, which in turn has now spawned a formal, annual Miami Tech Week that’s already organizing for April 2022.

After the cocktail parties and presentations wrapped up, Asparouhov told the Miami Herald that if the city can maintain its current momentum, 2022’s gathering could be “the greatest tech event ever”.

“Silicon Valley as the center of tech has now grown to be an extremely decentralized idea,” Asparouhov told The Herald. “Miami is much closer to Latin America, Europe, New York—all the other largest tech hubs around the world.”

Not to be outdone on the guerilla marketing front, Miami’s only home grown, billion-dollar tech unicorn, REEF Technology, which recently minted more than $700M in additional funding from a syndicate led by SoftBank, also has been running its own old-school, viral billboard campaign along I-95 and on the water since back in March, echoing in lock step the Mayor’s messaging—“Imagine Miami As The Next Tech Hub”.

The more important question than what all this means for Miami long term is are politicians, investors, and developers in Austin, San Francisco, Manhattan, or Boston paying attention?

Because the start-ups and capital sure are.

“The response to the billboard so far has been overwhelming,” says Goldentayer, “And exactly what I had hoped for. Developers and agents are calling and sending me pictures when they walk by and see it, and I already have referral leads coming through. All of this in turn is great for Miami.”

As for what comes next in Miami’s national guerilla marketing strategy, it’s likely only to get bolder and cheekier from here. As for Goldentayer, she’s currently contemplating other primetime #MoveToMiami billboards in Beverly Hills and Greenwich, CT.

Mayor Suarez, the surrounding Chambers of Commerce, and the rest of South Florida’s start-up community should appreciate the free advertising.