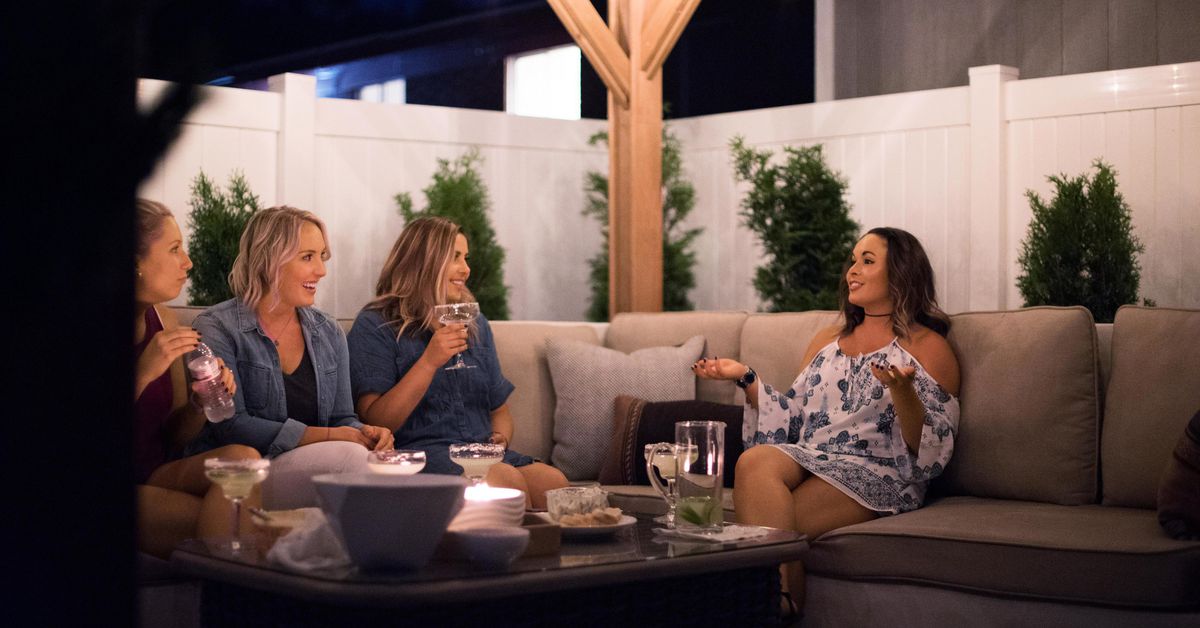 This article appeared in the Summer 2021 issue of This Old House Magazine. Click here to learn how to subscribe.

The handy homeowners: Molly Madfis, who blogs at Almost Makes Perfect, and her husband, Gideon Boomer

Project overview: Molly and Gideon wanted to give their LA backyard spaces a look inspired by the hip hotels of Palm Springs, using a palette of serene desert hues. First they replaced a falling-down fence along the back of the property, and much later “refaced” another one, covering it with redwood boards they then painted. They doubled the back porch’s footprint to 12 feet deep and 25 feet wide—a nice chunk of real estate in their 2,000-square-foot backyard. Molly enlisted her stepdad, Scott Miller, to help redesign the space, and after hiring a crew to remove the lawn and level the soil, they laid stabilized decomposed granite, renting a plate compactor to firm it up. “You’re supposed to keep a big barrel of it to fill in any holes that form, which we don’t really do,” says Molly. Still, it created a smooth canvas for plantings. Watering it periodically keeps the dust down.

Standout features: Molly’s favorite parts of the revamp? The louvered pergola roof that Miller designed to shade the porch; a contractor built it using a 14-foot engineered beam and 44 Douglas fir slats held in place with 8¾-inch tubes of stainless steel. Plus the African sumac tree and podocarpus that disguise unsightly power lines and fencing.

Lessons learned: After their toddler son, Arlo, crashed into one of the cacti they initially put in, they switched to “soft, flowy statement plants” like Pride of Madeira and coleonema, Molly says. What else she’d do differently: “I wish we’d splurged on a gas fire pit, since we were tearing up the yard anyway. And now that we have a kid, I wish we’d left one grassy spot.”

The payoff: Though the work took nearly five months to finish, the result is a hit. “We love our backyard,” Molly says. “During the summer we have dinner out there every night. We hang out on the couch and listen to music.” Or they’ll throw some logs on the fire pit and project movies on the wall of the studio for date night—who needs a drive-in?

The handy homeowners: Sarah Gibson, who blogs at Room for Tuesday, and her husband, Emmett

Project overview: To extend their living space, Sarah drew up plans for a 14-by-22-foot patio and a level new lawn bordered by fresh white fencing. “I wanted a big open space with plenty of seating for conversation and entertaining,” she says, so she mapped out a large pergola-topped gathering space, plus a grill station, and a fire pit area with four additional seats. To make her dream a reality, these experienced DIYers—both grew up in families that were in the construction business—began by leveling the yard using rakes and shovels, then installing a sprinkler system for a lush new lawn. They unfurled sod around the patio’s perimeter, then filled in its footprint with a base of aggregate and sand before laying the concrete pavers. Last, they installed a 12-by-12-foot stained pine pergola that they built from a home-center kit.

Standout features: To kick-start the furnishing plan, Sarah set about building an unexpected centerpiece: an L-shaped concrete sofa with room to seat eight. First she determined the overall measurements, using 46-by-26-inch, outdoor loveseat cushions she bought off the shelf. Then she laid a gravel base and tamped it in. She built the sofa by laying rows of concrete blocks, offsetting the joints, and pounding stakes of rebar down the middle, before filling them with concrete. Cap blocks set with construction adhesive gave it a solid top. For a smooth finish, Sarah stuccoed the surface with a fiberglass-reinforced bonding cement. The result? “Beautiful and functional,” she says. “It has held up really well against the elements.”

Lesson learned: “A couple of the pergola pieces were bowed, which is typical of these types of kits,” Sarah says. “It went together fine, but had we built it from scratch we would have been more selective. It wasn’t perfectly square.”

The payoff: They got the spring-through-fall entertaining destination they wanted as a result of all their hard work, Sarah says. Backyard cookouts can go from the heat of afternoon into the wee hours of the night, thanks to the pergola’s overhead solar shades, bug-shooing fan blades, and string lights that add more than a little atmosphere after dark.

The handy homeowners: Kim and Scott Vargo, who blog at Yellow Brick Home

Project overview: “At the time, we had two dogs that were always in the backyard killing grass,” Kim says. Their solution? A 6-by-8-foot “potty pit” under a new, wider exterior staircase. Filled with 8 inches of gravel, the pit gets hosed down frequently to keep it clean. Over the course of two months, they revamped the entire 25-by-25-foot backyard, adding a 15-by-18-foot patio with a wide gravel border. “We loved the idea of hardscaping the whole back, and giving it life and soft edges with planters lining the perimeter,” Kim says. After a contractor excavated and added a level base of crushed stone and sand, the couple installed the brick pavers. “We sloped them slightly so rainwater runs back to the potty pit as a natural rinse,” Scott says.

Standout features: To create the feeling of a garden room with wall-to-wall greenery, Kim and Scott built 37 linear feet of raised planter boxes in one weekend, using 10-foot lengths of 5⁄4×6 pressure-treated pine. Then they lined them with rigid-foam insulation to protect perennials during Chicago’s severe cold. To give the greenery even more height­—and improve the view from inside—they built wide slatted trellises from 2×4s they ripped down, and attached them to the side of the detached garage. A vintage metal fireplace they got secondhand and a dining table they built for $100 (inspired by a Restoration Hardware piece) anchor the patio.

Lesson learned: “The insulated planters have been nothing short of a miracle,” Kim says. “Most of our plants have come back every year.” Things they might change: “We stained the planter boxes chocolate brown, but today we might stain them black to make the plants really pop,” says Kim. And having lived with their DIY dining table for a while, “we’re thinking we’d be better off with a round table out there, for traffic flow.”

The payoff: “Kim and I are self-employed, so when the weather’s nice we set up our laptops on the table and work outside,” Scott says. “I’ve also been getting together with some dads on the block for socially distanced hangs by the fire. We play concert videos on YouTube. Our setup, which started with a laptop and a speaker, now includes a 32-inch flat-screen with streaming.” All the comforts­—and plenty of fresh air, too.