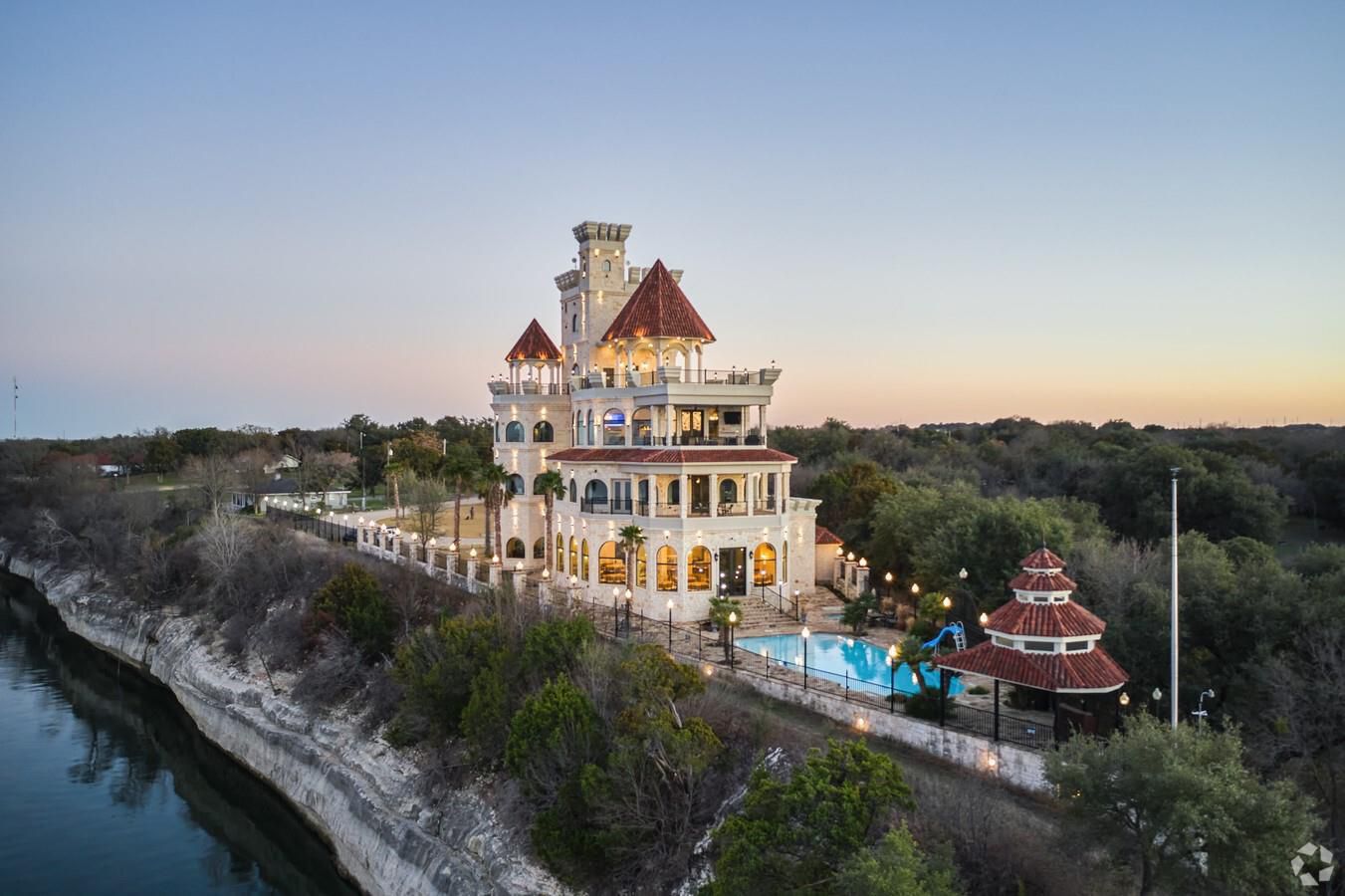 So when Stuart and Rebecca Parsons decided to build a home ten years ago, they planted it in Lake Whitney, a bluffy part of central Texas midway between Austin and Dallas —- right in that triangle —- known as the “Gateway Capital” to the Texas Hill Country.

Like many who start building private homes in land-spacious Texas, they were never planning on creating a “fairytale castle”. Nor even a plain castle. They wanted the water access, spacious views and privacy.

But a castle, on a cliff, is what they got.

First, Stuart found a lovely piece of land overlooking Lake Whitney. Like most of the lakes in Texas, Lake Whitney is man-made, a flood control reservoir on the main stem of the Brazos River in Texas. In recent years, rural and vacation home communities have sprouted along the 225 miles of shoreline. The jewel of both Bosque and Hill Counties, Lake Whitney covers 35 square miles with its crystal-clear water, providing a cherished destination for boaters, fishermen, and water sports lovers of all kinds, as well as a vacation getaway about two hours from Dallas.

“We started to build, and when we got to the fourth story, everyone told us the house looked like a wedding cake, much to my surprise,” Rebecca said. “We added the front porch, and then we realized it as well. That’s when it began to evolve.”

When Stuart started researching castles, the real fun began. Working with Waco architect Sterling Thompson, a full-on fairy tale castle was created, complete with a drawbridge and moat. Two ponds, on either side of that drawbridge, are in the shape of hearts, of course!

Rebecca and Stuart have built plenty of homes together, and Rebecca had a distinct vision for the castle. She knew what people wanted to see as they walked over the drawbridge and through the grand doors. The wow factor had to be the stuff of fairy tales, especially the chandelier. “I drove to Dallas and scoured the Market Center and eventually found 90 percent of what I wanted on the Internet, including that perfect chandelier!”

She also knew the home could be a perfect setting for young brides.

The Parsons decided to live on the third floor, and conduct all of their design experiments there. Rebecca understands brides. “I wanted something neutral so a bride could have hot pink or turquoise as her colors, and it would work inside the castle. So, we worked out the right tones and textures on our floor.

It took a decade, but when the doors of Parsons Castle swung open, the parties began, and they have not stopped.

The five-story, 11,500 square foot, ten-bedroom, fourteen (14!) bathroom castle has been the setting for every function you can imagine.

But of course, weddings are the heartbeat of this fairy tale castle.

With seating for 250 in the grand ballroom, 1,000 on the lawn, and the ability to sleep up to 50 guests, it’s at the top of most bridal wish lists for a perfect venue. The location can’t be beaten. It’s in that golden triangle of Dallas, Fort Worth, and Waco and only two hours from Austin. You’ll know it’s Texas, so everywhere is just down the road apiece.

“Seeing the joy in the faces of these young couples is the reward,” Rebecca said. “The most special day of their lives begins here, and you cannot replace that. We are going to miss being a part of that.”

The house is on the market, because the Parsons are ready for their next project: we can’t wait. Meanwhile, if you are ready for a fairy tale adventure, Addison, Texas-based listing Adam Musiel has this “fairy tale castle” ready for a prince or pauper. Asking price for the 11,500 square foot castle at 19 Private Road in Clifton, Texas. Listed for only 6.5 million!