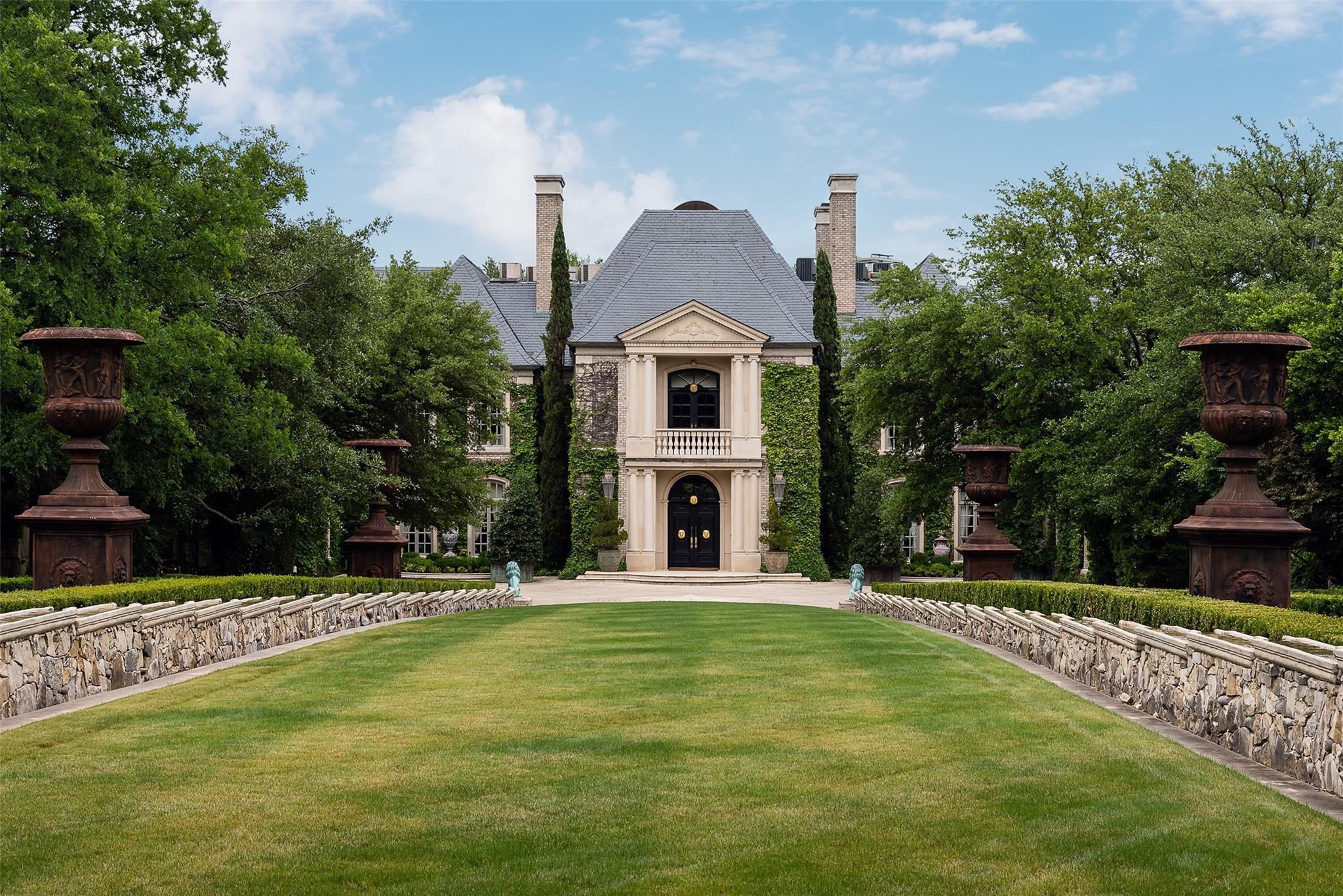 For Allie Beth Allman agent Kari Schlegel Kloewer, her new palatial luxury listing in the Meadowood Estates neighborhood of Dallas is almost bittersweet. It is the most expensive dirt for sale in town right now at $24 million. It is a stunning baronial masterpiece of 20,000 square feet that dazzles and amazes with every step you take, every room you enter. The French Chateau’s drive-up appeal on a “cobblestone” lane enhanced by 20 foot tall Parisian gas lanterns and urns is like few in the area — only comparable, perhaps, to the main home on the 25-acre Crespi Estate, now subdivided in Preston Hollow. The home is as luxury packed as they come with custom designed woodwork, moldings, walls and fixtures. The huge chandeliers wind down on winches for cleaning. There are two exterior swimming pools, a tennis court and pavilion, plus a rose garden, Italian stepped stone fountains, circa 1600’s historical statuaries and grounds galore. The Bachman Branch of the Trinity River flows through stone-covered walking paths, swaths of carefully tended grass in greens spaces waving nearby. You almost feel like mounting a horse on an English saddle. Egyptian Lions adorn the entry to the massive courtyard – a dream to behold!

Inside, there are five formal rooms off the grand foyer with double sweeping staircase plus nine bedrooms, nine fireplaces, fifteen full baths and four half baths including separate his/her formal powder rooms, commonly found in many large Dallas estates. There is a huge recently remodeled kitchen, a two-story library study, a pub-style bar, a media playroom complete with stage and basketball court, a theater. There is an outdoor screened pavilion with fireplace facing the tennis court and one pool. The master bedroom closet for the mistress of the house is four stories tall, all recently remodeled; his closet is also enormous. There are living quarters for live-in help, a spa, and a six-car garage off the motor court. Guest rooms have their own private balcony as well as another secret passageway.

But the best of all: there is a full underground wine cellar, accessible behind the bar, built right into the limestone rock foundation of the home itself, so cooling natural water trickles through to cool enough storage for hundreds of bottles stored behind a steel bank vault door. This houses all the 1st growth wines, utter paradise for wine connoisseurs. There is seating for up to fourteen guests, and many memorable events and dinners have been celebrated here.

This happens to be Kari’s family home, the home she grew up in from age ten. It’s a home so well designed for large scale entertaining and events that two weddings, presidential and gubernatorial events from three states have been held here: the guest list can easily top 700 for a seated formal dinner, and there are perfect valet accommodations through the rose garden. This is where her baby sister, Krystal, wanted her wedding to take place. “I’ve always dreamed of a wedding at home,” Krystal told Paper City Magazine. Her wedding invitations requested attendance for an “evening at home”; her husband, Luke Davis, proposed in the rose garden. Five hundred twenty-five guests attended the affair.

The Schlegel family has always been one of the most close-knit in town. Kari remembers attending auctions with her family — the Schlegels have four children — such as the ones that netted the 17th century French hand-painted panels in the dining room, originally made for a castle in France. Each panel depicts a different child from the castle. She also remembers the time a bartender got locked in the hidden silver closet off the dining room, her little sister Krystal giggling behind the draperies but refusing to get him help.

“There are so many nooks and crannies in this house,” says Kari, referring to the “secret room” off her brother Kirby’s suite. “This was the very best house to grow up in, and we all had a blast.”

This is also the mansion that Pavestone helped build. The estate was custom designed and constructed from 1989 to 1993 by Robert and Myrna Schlegel, owners of the nation’s largest dry cast-concrete paver manufacturer, The Pavestone Company. Pavers are landscaping bricks made of highly compressed sand, rock, and concrete that withstand freeze-and-thaw cycles and flex — perfect for expanding/contracting soils in states like Texas. Robert Schlegel knew of these paver blocks being used in Canada’s freeze/thaw conditions and in California, a state that, like Texas, was brimming with landscape enthusiasts. Schlegel thought the pavers would would be ideal for Texas’ fickle soil movement and building boom.

Bob Schlegel knew a thing or two about the earth. He grew up on a southern Ontario dairy farm one hour west of Toronto, Canada, in the twin cities of Kitchener-Waterloo. He met his wife, who lived five miles away, when his mother taught summer bible school. A favorite family lore is how Myrna Horst came home from school one day and exclaimed “That Bob Schlegel is such a nice boy. I hope he finds himself a good wife someday.”

From Bob Schlegel’s father, who became involved in the nursing home business when it was a mission care for 60 residents — Myrna, an RN, along with Bob, a CPA, expanded the mission into a very professional long term care business. Unable to afford to expand in the north due to pricing, they found their way to Texas at the age of 27 and 29. They moved the entire family business to Texas from Canada, schlepping the family of four back and forth between Canada and Texas a least twice a month.

Bob always looked for the next great opportunity. In 1980 he bought one paver compression machine and founded Pavestone Co. with two partners on 22 acres in fast-growing Grapevine, a mid cities spot between Dallas and Fort Worth.

“Our kids once told me the formula for Pavestone’s success was simple.” says Bob. “You just put sand and dirt in on one side, and money comes out on the other.”

Today Pavestone has 16 plants, stretching from California to the East Coast, re-branding as an earth-friendly alternative to concrete.

A lot of that “pavestone money” went into 4444 Valley Ridge. First of all, the 4.4 acre estate was knit together from three land parcels, one of which included the rocky natural creek and stream. The last parcel, about 1.5 acres, was added when a neighbor phoned Bob one day and literally told him to bring his checkbook. The late architect Elby Martin drew plans for the estate home with an incredible eye, and builder Bob Thompson executed the plans. As large, French and grand as this home is —- domed ceiling in the huge, double staircase sweeping foyer—- it stills feels very family centered and relaxed.

The Schlegels moved in with four children; they are leaving to downsize with six grandchildren.

The home was published in the New York Times in what was to have been a fashion spread but quickly evolved to a story poking fun at “Texas excess.” Oh the irony of it: now New Yorkers cannot get enough of that Texas excess, especially during a pandemic. 4444 Valley Ridge Road is listed by Kari Schlegel Kloewer, with co-listing help from her veteran broker Allie Beth Allman.

“Kari and I have always been so close,” says the grand dame of Dallas real estate. “I am doing whatever she asks me to do, meet showings, mostly the paperwork. We’ve had a couple showings.”

It would be unusual, says Allie Beth, if it were an immediate sale for a property of this magnitude.

“It’s a work of art, and the opportunity of a lifetime to get that much land and all the energy Myrna and Bob put into the estate. And it has wonderful karma.”

As for any special marketing approach, Allie Beth says mostly the old-fashioned way: word of mouth. Who will be the perfect buyer?

“Anybody who has the money,” she says.