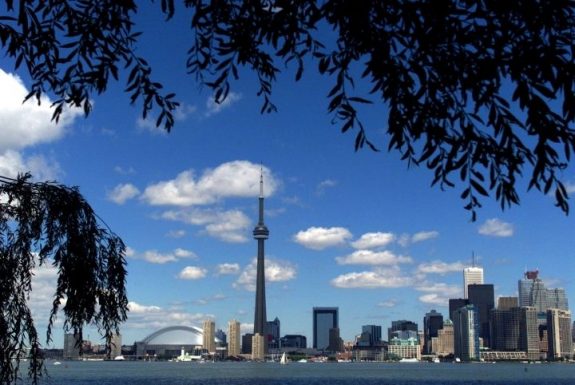 Forget everything you’ve heard lately about Vancouver and Toronto being overpriced when it comes to the real estate market because, as it turns out, we may have been wrong about Canada’s two busiest cities all along.

According to a new study released by the UK-based CIA Landlord, Vancouver and Toronto rank high on the list of affordable cities for young adults looking to buy property. (Yes, you read that correctly.) The company analyzed 46 cities from 20 countries, ranking them based on property costs, job availability, average salaries and overall happiness ratings. Here’s the breakdown:

Buying Property
When it comes to the best place in the world to buy property as a young adult, Vancouver came in first place, ahead of Wellington (second), Belfast (third) and Toronto (a more distant sixth). The study gauged that the average cost of rent to live in the city centre of Vancouver is £1,149.94 ($1,994 in CDN dollars), while buying a two-bedroom apartment or condo comes in at roughly £208,000 ($360,844 CDN). By comparison, Toronto averages £1,162.13 (just over $2,000) per month in rent, while purchasing a two-bedroom unit costs roughly the same amount as Vancouver.

Overall Affordability
Taking into account the average salary in each city, CIA Landlord’s concluded that Vancouver ranks second in the world in affordability for young adults thanks to an average monthly salary of £2,567.44 ($4,454.24 CDN). Toronto, which placed markedly lower on this list, comes in 11th place, with an average monthly salary for young professionals coming in at £2,362.42 ($4,097.09 CDN).

The Happiness Factor
Although living in a major city can bring about its own stressors (rush-hour traffic, crowded subways, noise, pollution, etc.), Vancouver and Toronto still come out near the top on the happiness scale. The data for this section pulled from such considerations as affordability for leisure activities and competitive salaries. Vancouver and Toronto placed 11th and 12th, respectively, for the happiest cities in the world. Number one? That would be Finland’s own Helsinki.

Highest Paying Cities for Young Adults
Finally, CIA Landlords gathered information on the average monthly salaries in the 46 cities they examined. It was determined that Vancouver is 13th in the world for high-paying gigs for young adults, with Toronto coming in 17th place. And, with more people working from home as the pandemic continues, the UK company predicts more will flock to these major cities for the excitement, amenities and conveniences, even if they’re technically not working in the city due to remote jobs.